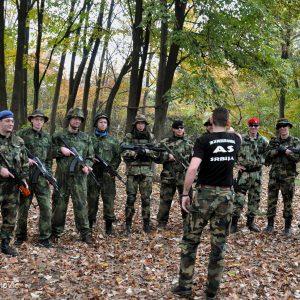 Airsoft is so much more than grown-ups dressing up as soldiers and shooting each other with replica weapons that fire 6mm BB’s, it’s an opportunity to have some real ‘hands on’ experience at war gaming.

Airsoft as we know it is a combat sport that originated in Japan in the early 1980’s as the Japanese answer to the American craze of Paintball.

It is a primarily recreational activity where replica firearms shooting plastic rounds are used for gaming, or professional training purposes (Military Simulations and Police training exercises). Airsoft Realistic imitation firearms (RIFS) uses 6mm or 8mm plastic BB ammunition and have muzzle velocities of less than 600 feet per second (FPS), which is generally considered safe when used in a controlled environment, this is fast enough to feel, however slow enough not to hurt too much.

No matter what age, gender or size you are. It is primarily a team sport, although games such as last man standing and rifles versus pistols are great fun. Players quickly learn that proper planning prevents poor performance and an early walk back to the safe zone. Some scenarios may seem familiar to those who have played Paintball but the addition of full automatic capability and longer range add new dimensions.

Can be played in all weather conditions in a vast wooded area with simulated village on site.

Your instructors are ex Serbian Special Forces, you can play out different scenarios, such as Hostage release and VIP protection.

Situated on the outskirts of Belgrade (15 mins from center).

All clothing and equipment provided (apart from footwear) boots recommended.

Your health & safety are EXTREMELY important to us,

So that is why our staff or marshals insist that site rules are strictly obeyed.

They are there for your benefit.

Things to do in Belgrade

Activities may be booked separately, subject to availability. If you wish to book activities only please contact phone: +381 (0) 652627285 or e-mail: party@belgradestagweekends.com